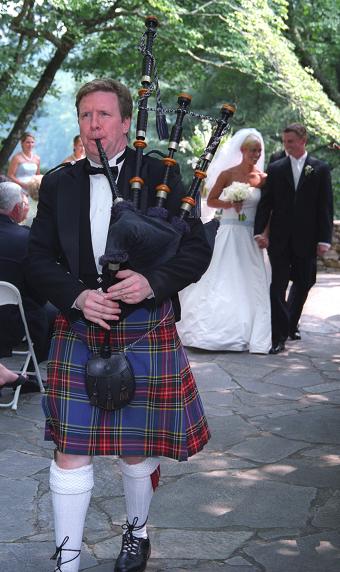 Bradford Beaton started playing bagpipes at age 14. Over the past forty plus years, Brad has competed and won as both a solo piper and as the leader of a pipe band at many highland games such as Dallas, Grandfather Mountain, Stone Mountain, Charleston, and Savannah. He has been invited to play at many other types of engagements including weddings, parades, funerals, highland games, parties, golf events, and more. He can tune his bagpipes to play in harmony with any church pipe organs as well as many other instruments.

"On my 8th birthday, which was on Christmas day,

Grandpa Joseph Beaton gave me a toy bagpipe, and I can remember observing with endless fascination as he played The Brown Haired Maiden and Crossing the Minch on his pipes in the basement at 15 Boynton Road, Medford Massachusetts.

When I was 12 years old Grandpa Beaton passed away and we inherited his bagpipes, a fine set of 1910 Laurie pipes that he played in World War 1. Although I own many sets of bagpipes, I still prefer and mainly play grandfather's pipes to this day. Grandfather had planted the seeds of interest, and Dad gave me a chanter and a book and got me started on my learning.

A few months later we moved to Dallas where Pipe Major Robert Forbes accepted me as a student. Robert Forbes was a former WWII Spitfire pilot from Edinburgh, and a great piper, leader, and mentor for me, and I will always be grateful for his leadership, teaching, and service. During the summers of my teenage years, Robert Forbes would bring over some of the best pipers in Scotland to teach for a week at a piping school set up in Lake Highlands High School. Seaumas MacNeil always came to teach, along with others such as Duncan Johnstone and Dr. John Burgess.

As a young adult, I moved to Columbia, South Carolina where I began taking summer sessions at the North American Academy of Piping to take lessons from Sandy Jones. My parents were in the same pipe band with Sandy in Spokane Washington when they were teenagers. In Columbia I started a pipe band and taught several students, including my good friend Billy DuBose, who is now a leader of the Palmetto Pipes and Drums based in Columbia, and has become a very accomplished piper.

In the year 2000, I moved to Atlanta and joined the Atlanta Pipe Band, playing at the top level. Later I started the North Atlanta Pipes and Drums (now North Georgia Pipes and Drums) and served as pipe major for 7 years. I lead the band to victory among many competitors at Stone Mountain in 2012 and at several other highland games.

I've taught all my 5 sons, and my youngest child, a daughter, to play the pipes, and several have become quite good pipers, including Daniel, Stephen, and Joshua."

Bradford also sells bagpipe band equipment and sells and rents highland attire at our sister website AtlantaKilts.com. Be sure to check it out for more great ideas to enhance your event.